Jimmy Pizzitola is a Houston based singer/songwriter, night-time landscaper, and lover of all things jellicle (except Cats).  His early musical influences, driven into his three year old skull while being held captive in the back of a 1968 blue Malibu by his carpool-driving mother, were the singer-songwriters of the 1970’s.  Between dropping off and picking up siblings and assorted neighborhood ruffians, Jimmy was force-fed Jim Croce, Neil Young, James Taylor, Gerry Rafferty, and of course, Der Weinershnitzel corn dogs.  Come weekend, he would often head out to South Texas with his father and grandfather to shoot at things.  Sitting on the console of a Ford Bronco, squeezed in between stacks of 8-tracks and bottles of V.O., he would sing along with Waylon, Willie, Hank Williams (Jr. and Sr.) Don Williams, and other country-fried offerings of the time.

Strictly in the name of research, his father would often venture out into various ice-houses and beer joints in order to update his blog (betterbeicefreakingcold.org), which focused on the relative temperatures of Miller Lite in different sections of the city.   Jimmy would often accompany him on these outings and it was there that he observed first-hand the so-called “Texas Singer-Songwriter” in his original habitat.  Needless to say, it had a lasting effect.  He quickly blackmailed his father into buying him a pawn-shop guitar and started learning Townes Van Zandt songs.

After returning to Texas from Colorado in 1998, Jimmy began writing songs and fronting a Houston-based Alt-Country band, Jimmy James and The Enablers.  Songs like the honky-tonking “Where the Hell’s The Johnny Cash in Your Jukebox?”  and the quirky “Sweet Marie” were instant fan favorites.  After a failed attempt to cut a record the old-fashioned way – with an investor, producer, hired guns, etc…, and the birth of a child, Jimmy took a performing hiatus and tried having a real job, with an income and everything.  It didn’t take and it didn’t take too long before Jimmy had a fresh batch of songs and began hitting the clubs again.  He also started devoting more time in his home studio and began working on the record that would eventually be Poet On The Run.

In 2007, Jimmy was included in Steve Harris’ book “Texas Troubadours” alongside the likes of Billie Joe Shaver, Kris Kristofferson, Guy Clark, Joe Ely, and others.  He joked at the time that he was the only one in the book without a record.  With the 2010 release of Poet On The Run, all joking aside, Jimmy is sure to carve out a place all his own in the long line and deep-seeded tradition of the mythical Texas Singer-Songwriter. 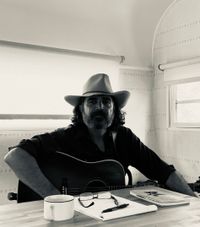 Swapping songs with the one and only Gabe Wootton on a Thursday night at the Mid Main Complex's Big Top Lounge. BEETLE plays at the Continental next door at 7, so come on out and make a night of it.